Added to Your Check-Ins.

Top Movies and TV Shows to Stream in August 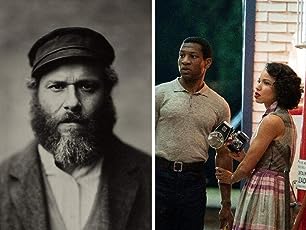 August picks are here, including a time-traveling Seth Rogen and a terrifying new series from Jordan Peele and J.J. Abrams.

Keep up with all the biggest announcements and updates with IMDb's breaking news roundup of Comic-Con@Home 2020.

Get the Latest News

Search for "Dolemite Is My Name" on Amazon.com

Want to share IMDb's rating on your own site? Use the HTML below.

You must be a registered user to use the IMDb rating plugin.

After he is released from jail, a pimp takes on the criminals and corrupt police officers who framed him in the first place.

Behind Vatican walls, the conservative Pope Benedict XVI and the liberal future Pope Francis must find common ground to forge a new path for the Catholic Church.

An extremely pampered African Prince travels to Queens, New York, and goes undercover to find a wife that he can respect for her intelligence and will.

A conman discovers during a "job" that US Congress is where the money is. "Name recognition" gets him elected. Will he develop a conscience?

Hal, wayward prince and heir to the English throne, is crowned King Henry V after his tyrannical father dies. Now the young king must navigate palace politics, the war his father left behind, and the emotional strings of his past life.

Noah Baumbach's incisive and compassionate look at a marriage breaking up and a family staying together.

"Mr. Church" tells the story of a unique friendship that develops when a little girl and her dying mother retain the services of a talented cook - Henry Joseph Church. What begins as a six month arrangement instead spans into fifteen years and creates a family bond that lasts forever.

Six tales of life and violence in the Old West, following a singing gunslinger, a bank robber, a traveling impresario, an elderly prospector, a wagon train, and a perverse pair of bounty hunters.

During the 1930s, a New York City illegal gambling house owner and his associates must deal with strong competition, gangsters, and corrupt cops in order to stay in business.

A Hostage Negotiator teams up with a Sharpshooter to bring down a dangerous jewel thief.

An old man recalls his time painting houses for his friend, Jimmy Hoffa, through the 1950-70s.

Make your own legend.

While filming the sex scene, Rudy Ray Moore says the line "Put your weight on it." While this line is never said in Dolemite or The Human Tornado (the film the actual scene is from), it's said 24 times in Moore's fourth film, Disco Godfather. It's included here as an "inside joke." See more »

Walter Crane: I don't know how much longer we can do these pictures, Rudy. You see, that's why we changing our approach. We got a new one coming. I bet you gonna like this. You really gonna dig this one. Check this out. It's called Cornbread, Earl and Me. It's about a kid from the ghetto that's the first from the neighborhood to get out and make it to college. Now, don't that make you feel good on the inside, Rudy?
Rudy Ray Moore: Brother, don't nobody wanna see no shit like that.
See more »

A typical biopic buoyed by its unrelenting hilarity, its affection for its subject and commitment to the time and place it is set.
22 September 2019 | by ierenz – See all my reviews

"Dolemite Is My Name" is a typical biopic bolstered by its implacable hilarity, its affection for its subject and its commitment to the time and place it is set. And yet, I'm still being nagged by something about his lead performance. Don't get me wrong, Murphy is very, very good, and I'd love to see him tackle Pryor next because of that. Just like Rudy Ray Moore, I buy him more than I do like Dolemite.That's probably the intention here, as Moore repeatedly says in the movie that the role is a put-on. That I keep rolling around in my head this performance says something about its staying power.Murphy isn't exactly the most charitable actor when he's the lead, a by-product of his star power, but he's here at its best when he's slyly letting the scene be stolen from below him.

This FAQ is empty. Add the first question.
Edit

Dolemite Is My Name See more »

Contribute to This Page

Your Next Binge Watch Awaits

Looking for something to watch? Check out IMDb's "What to Watch" series to find out what's really worth watching.